One of Media Options' Senior Broker Chris Zuiker's most loved brand stories is that of Carrot and Carrot.com. I've heard Chris mentioned this domain several times on his podcast, and with good reason. It's a fantastic story of how a brand took it upon itself to reposition as the Carrot brand online.

The story focuses on the real estate platform Carrot, which paid $575,000 to acquire the Carrot.com domain name. It was a significant investment for the business, but it made sense for several reasons and is an excellent example of how a company can stand out when using a popular brand name.

According to LinkedIn, there are at least 671 companies that use "Carrot" as all of, or part of, their brand name. Trademarkia shows 424 broad match trademarks for "Carrot", and Crunchbase lists dozens of "Carrot" brands.

It's a crowded brand name thanks to the generic, versatile familiarity of "Carrot." The issue of overcrowding is common among similar common brand names.

To describe the digital overcrowding that is affecting the Carrot brand name, I've created this table to give you a sense of what I'm talking about. 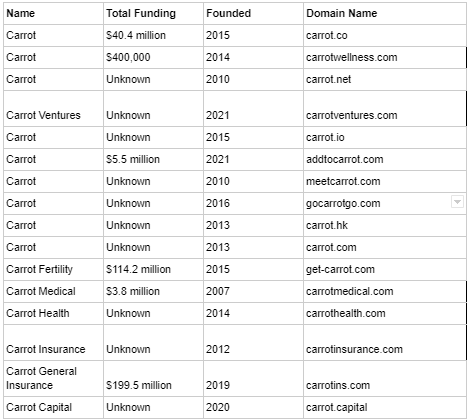 The list above offers a glimpse into the issue surrounding the Carrot brand name. You can see that while all the brand names above contain "Carrot", only one operates on the exact-match, Carrot.com.

Overcrowding of a brand name may not necessarily be an issue that is immediately considered, but it is a real problem.

As you can see from the list above, multiple businesses branding around Carrot have built their digital identities around domain names that may have been their second choice.

An overcrowded brand name leads to more active use of alternative domain extensions, such as .co, .io, or .xyz and forces a higher number of brands to add prefixes and suffixes to form available domains.

The problem of overcrowding on the Carrot brand name goes beyond this list, too. According to DotDB, the exact-match keyword is registered in 216 different domain extensions, while more than 8,100 domains contain Carrot.

While many of these domains will be undeveloped, thousands of names will support businesses branding around the Carrot keyword.

Owning the Brand with Carrot.com

In 2019, real estate brand Carrot was one of dozens of similarly named businesses operating around a subpar domain. In this Carrot's case, the company operated on OnCarrot.com, a domain name founder Trevor Mauch registered just before Carrot launched in 2013.

While OnCarrot may have been a suitable name for the bootstrap company initially, it began to cause some issues as the company grew.

In a DomainNameWire interview in 2019, Mauch described a series of encounters that he had at a conference that Carrot sponsored, saying, "50% of the people that were at the conference came up to us and said, we love OnCarrot. We absolutely love OnCarrot."

This is something that happens wrongly often, and no matter how many marketing dollars are thrown at the problem, it will persist.

Carrot's founder, Trevor Mauch, decided to tackle the issue head on, building on the company's growth and momentum by purchasing Carrot.com.

Mauch originally agreed to pay a $600,000 fee for Carrot.com, with payments spread over a period of time. Opting to pay off the purchase price early saved Mauch $25,000, ultimately paying $575,000 to take full control of Carrot.com.

In a press release announcing the acquisition, Mauch said, "People might think a small, bootstrap company from rural Oregon is crazy to pay so much to own a domain named after a vegetable. But we've reached enough momentum as a company that we decided to invest in the perfect domain name for Carrot, which of course is Carrot.com. This is an investment in our future, doubling down on our brand, and a commitment to go bigger and impact far more small businesses."

Owning Carrot.com has allowed this company to position itself as the Carrot brand online, standing out from the crowd of other Carrots.